Turnover in the manufacturing sector in Germany (industry + other companies such as food production etc.) fell by 0.2% in comparison with December to January, as recent official data show. Incoming orders also fell by 3.9% in this month-on-month comparison. Is that bad?

From December 2016 to December 2017, new orders increased by 7.9% according to freshly revised figures from today. Turnover from November to December (the month-on-month comparisons) was up by 3%, which shows the large fluctuations from month to month. The outlook for the coming months will therefore remain more than rosy, thanks to the order situation.

The graph below shows new orders in the manufacturing industry since 2010. 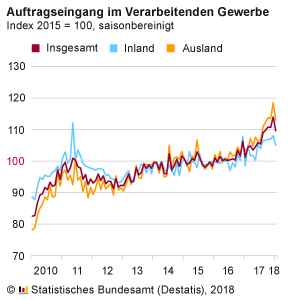 Shown here are the sales figures since 2010.

Current: New orders in the construction industry – end of the boom

Looking at the following data, we can say that the boom in the construction industry has come to an end. But there is no dramatic crash yet. A few minutes ago, the Federal Statistical Office […]

Loan interest rates for corporate customers in Germany are falling dramatically towards the zero line. According to the Barkow Consulting Corporate Credit Index, the interest rate on new loans with a five-year fixed interest period […]

The guiding Government that helps the people – in this fairy tale the Customer is the stupid!

France historically has an extremely centralized and partly state-owned economy. Therefore, there are rather larger corporations proportionally in state ownership, and little independent middle class. Germany is much more market-oriented and more open. Nevertheless, the […]