Chart technically there is a lot going on at the moment, and this in various asset classes. At this point, we want to fly across the markets. Let’s start with the Swiss franc. In the following chart since July last year, the months-long, constant upward trend of the euro against the franc can be seen clearly. This is exactly what the Swiss National Bank wants. Shortly before the actual Swiss Franc appreciation, Thomas Jordan, head of the Swiss National Bank (SNB), said that the franc is still overvalued. So the franc should continue to fall and EURCHF should continue to rise. Therefore, one can look “with interest” at the current decrease in EURCHF. First of all the Chart picture is broken. But all the statements indicate that the SNB will keep interest rates low in the cellar for much longer than the ECB (i. e. for a long time to come). This should actually (!) bring the euro up against the franc again (please without guarantee from our side).

The oil price (WTI) reached its highest level in 3 1/2 years last Thursday at $66.60. For now it dropped “only” to $65.26. That´s not much, not even a correction! In the following chart since April 2017 you can see it well. At the top right the little twitch – that’s not even a slight correction, but only a short movement in the upward rush. We have criticised these rapidly rising prices several times. But the market is always right. Actually, a correction would be long overdue. Maybe down to $60? Of course, that’s just an Idea!

We were right with out feeling about Tesla. We have learned from the last few years about the aura of the “godlike” Elon Musk, to whom his disciples forgive everything and believe everything. Disastrous production problems are just simple “production bottlenecks” for Elon Musk. For example, last week there were horror reports about de facto manual production in Tesla factories, which means that production targets have to be postponed again and again. Meanwhile, the company burns money endlessly. For those who are interested, the market only reacts on such news negative for a little moment! The share price fell from $345 to $335, and today it’s back at $342.11. Going on, going on, and on? The Tesla share is shown on the chart since the end of September 2017. It remains stable, despite constant negative reports. Tesla’s quarterly figures will be released on February 7. 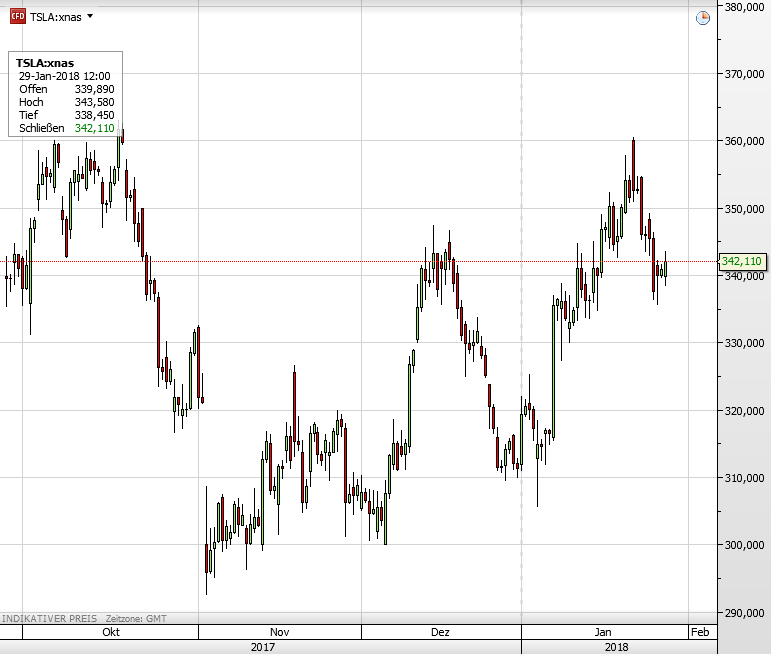 The following chart shows the Euro against the Turkish lira since the beginning of 2015. Since that time EURTRY needed several attempts to move to new highs. But when the time came (red lines), it went up impressively (Lira devaluation). EURTRY has risen from 2.75 to 4.68 since 2015 and is currently on the verge of reaching its November high of 4.72 (now 4.68). At least one trading idea would have to be based on another breakthrough. But as you can see on the chart: This may take some time. There are no guarantees here either. Of course, unforeseeable scenarios can also occur, such as central bankers in Ankara, who are able to assert themselves against President Erdogan and raise interest rates. Then EURTRY would be heading south for some time.

Here you can see the SAP share (black) against the Dax (orange) since July 2017. Now it will be interesting to see whether the share can catch up with the Dax again tomorrow. SAP will be presenting its quarterly figures tomorrow morning (8 AM CET or earlier)! We report as soon as possible! 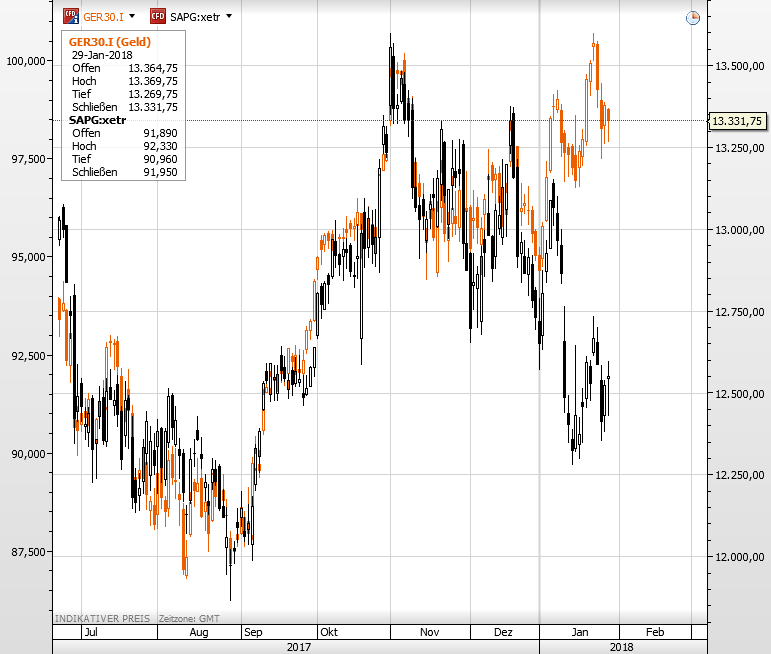 The OPEC Decision Thursday evening was exactly what the market expected. Prolongation of cuts of 1.8 million barrels per day since October 2016 (including Russia and other external partners). The current duration until March 2018 […]

Oil prices continue to rise – how long can this go on for?

The bubble on the futures markets for crude oil is getting bigger and bigger. Traders report increasing exposure to put options. We don´t even need to talk about the long overhangs in futures contracts. Of […]

Stock markets, gold and oil in the context of the G20 summit

The European markets are picking up the momentum of the weak Asian trading day in particular – the first step is to take cover in view of the G20 summit. Stocks moved lower in Asia, […]