The Bank of Canada has just announced that it will keep interest rates unchanged at 1.00%. This was expected, and the level was already at 1.00%. But stop. The expectations were met, but then such a reaction to the Canadian dollar? Because it´sjust beginning to depreciate! US dollar vs CAD rises in a very first reaction (ALGOS) from 1.2661 to 1.2730.

BoC says in the further observation of the situation is will be “restrained”. That means: No further interest rate step in the near future! This Scenario actually weakens the CAD. Oh yes … read it for yourself, the BoC sees the overheating economy (total credit bubble), but it notes at the end of the text: Everything not so really bad, runs somehow, everything is fine (translated in clear language by ourself). Quote BoC:

Recent Canadian data are in line with October’s outlook, which was for growth to moderate while remaining above potential in the second half of 2017. Employment growth has been very strong and wages have shown some improvement, supporting robust consumer spending in the third quarter. Business investment continued to contribute to growth after a strong first half, and public infrastructure spending is becoming more evident in the data. Following exceptionally strong growth earlier in 2017, exports declined by more than was expected in the third quarter. However, the latest trade data support the MPR projection that export growth will resume as foreign demand strengthens. Housing has continued to moderate, as expected.

Inflation has been slightly higher than anticipated and will continue to be boosted in the short term by temporary factors, particularly gasoline prices. Measures of core inflation have edged up in recent months, reflecting the continued absorption of economic slack. Revisions to past quarterly national accounts have resulted in a higher level of GDP. However, this is unlikely to have significant implications for the output gap because the revisions also imply a higher level of potential output. Meanwhile, despite rising employment and participation rates, other indicators point to ongoing­ – albeit diminishing – slack in the labour market.

Based on the outlook for inflation and the evolution of the risks and uncertainties identified in October’s MPR, Governing Council judges that the current stance of monetary policy remains appropriate. While higher interest rates will likely be required over time, Governing Council will continue to be cautious, guided by incoming data in assessing the economy’s sensitivity to interest rates, the evolution of economic capacity, and the dynamics of both wage growth and inflation. 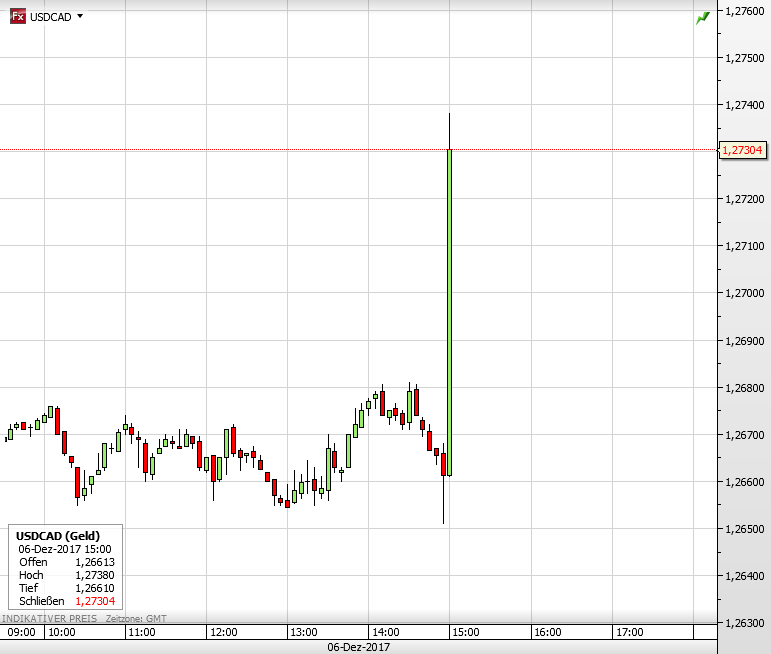 The Economies and especially the credit and real estate markets in Australia and Canada are not dancing on the volcano – they´re already glowing so hard that you can´t really dance anymore. Nevertheless, the dance […]

The Bank of Canada has just announced its interest rate decision. After a previous 1.00% and an expectations of 1.25%, the central bank is now raising the key interest rate to 1.25%. US dollar vs. […]

If the sales of existing houses fall by 14.5% within a month, then there may be something wrong on the real estate market. This is what is happening in Canada now. Further detail figures also […]

Boris Johnson has the coronavirus! He just posted it on Twitter. He would now be at home in quarantine and continue government business, had mild symptoms and tested positive for the coronavirus. This is the […]

The Euro also showed its strong side against the US Dollar in yesterday’s trading session. Early this morning, the bears only tried to push the price down once. However, this attack failed. And it failed […]

Stock markets have now posted three consecutive days of gains on hopes of government stimulus and faith in central banks. But today is a long Friday with the question of whether the U.S. House of […]